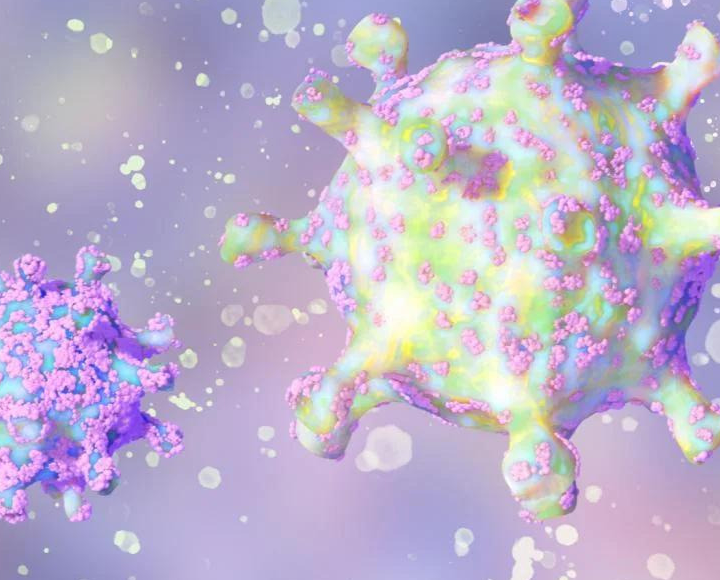 Acids Fight Airborne Viruses – This acidity determines how long viruses such as influenza and SARS-CoV-2 remain infectious in the air, with profound implications for their transmission.

Viruses like SARS-CoV-2, the flu virus, and others travel from person to person by hitchhiking on aerosols. These are finely dispersed liquid-containing particles suspended in the air that are coughed, sneezed, or exhaled by an infected person and can be inhaled by another person.

It is not clear how long viruses remain infectious in aerosols. Some studies suggest that air humidity and temperature may play a role in the persistence of viruses. One factor that has been underestimated so far is the chemical composition of exhaled aerosols, particularly their acidity and interactions with indoor air. Many viruses, such as influenza A, are sensitive to acids; exhaled particles can absorb volatile acids and other airborne substances, including acetic acid, nitric acid, or ammonia, from indoor air, affecting the acidity (pH) levels of the particles.

The effect of aerosol acidification after exhalation on the viral load they carry has not been investigated.

A team of researchers from ETH Zurich, EPFL, and the University of Zurich has investigated precisely that. In their study, they show for the first time how the pH of aerosol particles changes in seconds and hours after exhalation under different environmental conditions. The small exhaled aerosol particles acidify very quickly.

According to the paper, exhaled aerosols acidify quickly and faster than expected. How fast they do this depends on the concentration of molecules in the ambient air and the size of the particles. The team examined tiny droplets – just a few micrometers – of nasal mucus and lung fluid synthesized specifically for the study. In typical indoor air, it took only about 100 seconds for these droplets to reach a pH of 4, which is roughly equivalent to

The researchers argue that aerosols‘ acidification is mainly due to nitric acid from the outside air. It enters indoor spaces through open windows or when ventilation systems draw in air. Nitric acid is formed by the chemical transformation of nitrogen oxides (NOx), which are released into the environment mainly as a product of combustion processes and exhaust gases from diesel engines and domestic ovens. Consequently, in cities and metropolitan areas, there is a permanent supply of nitrogen oxides and nitric acid.

Nitric acid quickly adheres to surfaces, furniture, clothing, and skin but is absorbed by tiny exhaled aerosol particles. This increases its acidity and lowers its pH.

The pH of the aerosol is critical for the inactivation of the virus.

The research team further demonstrates that the acidic environment can significantly impact how quickly viruses trapped in exhaled mucus particles are inactivated. The two types of the virus were found to have different acid sensitivities: SARS-CoV-2 is so resistant to acids that experts initially did not believe their measurements. A pH below 2, i.e., highly acidic conditions like undiluted lemon juice, was needed to inactivate the coronavirus. Such situations cannot be achieved in typical indoor air. Influenza A viruses, on the other hand, are inactivated after only one minute in acidic conditions of pH 4. Freshly exhaled mucus particles reach this level in less than two minutes in typical indoor environments.

The study shows that in well-ventilated rooms, aerosolized inactivation of influenza A virus works effectively, and the threat of SARS-CoV-2 can also be reduced. However, in poorly ventilated spaces, the risk of aerosols containing active viruses is 100 times higher than in rooms with a substantial supply of fresh air.

How Much Does It Cost To Transfer A Number Plate?

What is Dad and Buried the Anti Parent Parenting Blog