Home GAMES How does the Nintendo Wii work

The Wii is the last gaming console released by Nintendo, officially available in stores since November 19, 2006. The device competes directly with the PS3 and Xbox for the preference of users, all within the seventh generation of consoles.

It leads with a wide advantage in number of sales compared to its rivals, surpassing fifty million units sold worldwide. The biggest differential of the console is the way to control within the games, using extensively the special motion sensors of your joystick.

The device is responsible for the digital inclusion of several people in the world of games, an asset that no other console has achieved to date. It’s common to hear from friends that their parents, uncles and even grandparents for the first time got their hands on a joystick, all thanks to the Wii.

In this article, we are going to address several features of the best-selling console in the world today, such as its structure, components, accessories and all the possibilities that involve the device. If you’ve always wanted to know a little more about the Nintendo Wii, check out its description in the lines below.

This is undoubtedly the great differential that the Wii brought to the seventh generation of consoles. Nintendo has put all its efforts into developing an interesting and innovative way to control games, based on real player movements.

This means that, on the Wii, in most games you will need to move the controller to perform several important actions, such as hitting a tennis ball or punching opponents. All the movement is captured by an infrared sensor placed next to your television, in addition to the existing Bluetooth connection in the system.

Working together with the Wiimote, the Nunchuk makes the gameplay even more complete, featuring an analog handle of movement, in addition to movement sensors, as in the main control. The accessory is easily attached to the bottom of the Wiimote, and allows you to move your character while aiming a weapon, for example.

Many users complain about the difficulty and complexity of playing certain titles with the original Wii controller. Given this type of situation, Nintendo developed a classic control for the device, containing the format and functions of a common joystick, combining aspects of the Super Nintendo and the Nintendo 64. In addition to the aforementioned functions, it is ideal for old consoles from the company, made available for the Wii in a very interesting virtual console system, which we’ll cover later. 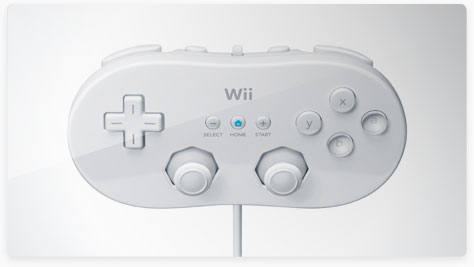 Nothing that the Wiimote proposes would be possible without the Sensor Bar, a small bar specially designed to capture the movements performed with the controller. Through two infrared sensors, it allows you to aim at the screen and perform many of the main movements of many games, capturing everything in real time.

As the name suggests, this accessory is the official microphone of the Wii. It allows up to four people to communicate simultaneously on the Wii Speak channel in a conversation, even if each is in a different corner of the world.

Keeping the idea of ​​revolutionizing the way of playing, the Wii Balance Board can be considered one of the most revolutionary accessories of the console. With it, you can perform dozens of interesting exercises from games specially developed for the system, such as stretching exercises, jumping, push-ups and a multitude of other applications.

While the Wii’s controls are revolutionary and have attracted the attention of millions of gamers worldwide, many complain about the device’s precision. Wii Motion Plus promises to improve this aspect dramatically, increasing the accuracy and capture of movements through the Wiimote. The video above shows how precision in games takes on a new level when using Motion Plus coupled to the Wii Remote. It is possible to see that minimal movements in the control are accurately perceived by the console, greatly improving the quality of your gameplay.

Among the releases shown at the conference, one of the biggest highlights is New Super Mario Bros. Wii, finally bringing Mario in a more classic version to the console. Its biggest differential is a cooperative multiplayer mode, ideal for playing with friends. Still talking about the mustache, the continuation of Super Mario Galaxy is on the way, promising even more news than the first game in the series. A new version of Metroid is also on the way, already eagerly awaited by series aficionados.

To finish the game news for the console, three major productions from other production companies are on the way. The Conduit, Resident Evil: The Darkside Chronicles and Dead Space: Extraction are the big news for 2009.

What is your opinion on the Wii?

If you were looking for a new console, we hope this article has helped you to better choose which one to buy. We have two other articles covering the other seventh generation devices, the PS3 and the XBox.

The Wii has its advantages and disadvantages in relation to its rivals, and it is up to you to weigh them according to your profile as a player and your expectations regarding the console.

Difference Between Traditional And Metaverse Games

Can you game on a USB Computer?

Mohit - June 24, 2022 0
From plastic bags to pipes and furniture: R-LDPE For instance, recycled LDPE finds a second life in a variety of applications including wood-plastic lumber, whereas...

December Umrah Packages 2022: All You Need to Know!

OdiliaBair - June 24, 2022 0
It's that time of year again when people are looking to travel for Umrah. There are many different December Umrah Packages 2022 to choose...

How to Setup a Software Company in Dubai

John Harry - June 24, 2022 0
The importance of the Software Industry is expanding every day. Can you imagine spending a single day without using the internet, a smartphone app,...

ReactsNews is the brainchild of a team of the best news writers known. With a vast outreach and popularity for engaging exclusive and authentic content in the world of Technology, ReactsNews has risen like a phoenix as one of the acclaimed Technology-based news sites to date.
© 2022 - ReactsNews. All Rights Reserved.
MORE STORIES

An important study confirms that video games increase the IQ of...

What is PUBG Mobile and why is everyone talking about PlayerUnknown’s...

Traditional and popular games for children