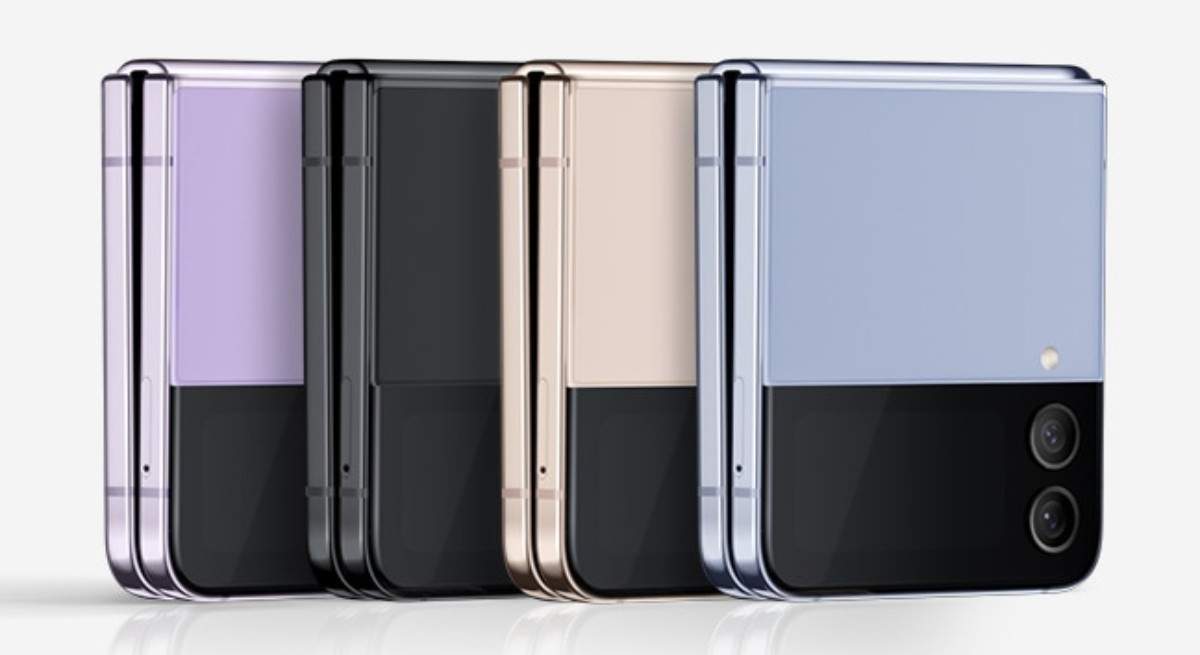 It is not a whim, nor an adventure nor a flower of a day. The folding format is very serious, so much so that Samsung trusts much of its technological load in this category of high-end mobiles. For now, after three models full of audacity, now comes the fourth generation of hinged mobiles and, with them, the coming of age of this promising product. The South Korean manufacturer’s effort to differentiate itself from the rest of its competitors is especially worthwhile in a market where everyone looks alike. Samsung’s latest movement, through the Galaxy Z Flip4 (in the form of a shell, with prices between 1,099 and 1,279 euros) and Galaxy Z Fold4 (between 1,799 and 2,159 euros), with the appearance of a notebook), confirm that there is no return back in the audacity to transform the mobile into a mini tablet.

It is a long-distance journey where details of previous equipment are now being refined, such as the case of the battery, the features of the screen, or the incorporation of possibly the most powerful processor on the market.

Regarding autonomy, Samsung has successfully resolved a challenge that is especially relevant when dealing with high-performance devices. Given the intensive use expected of these smartphones of more than a thousand euros, the manufacturer has increased the milliamp figure of the Z Flip4 by 12% to 3,700 mAh, while the Z Fold4 has a 4,400 mAh battery. Both devices have super fast charging, included in the wireless version, to accelerate 50% of the charge in just half an hour. Not having to open the phone to make calls, respond to text messages or take photos also extends battery life by avoiding lighting up the large internal screen. In fact, according to Samsung, “the Z Flip4 has been designed to be able to do everything without hands.”

In the efficiency of the device, a special role is played by the microprocessor, a 4-nanometer octa-core ( Snapdragon 8+ Gen1 ) of 4 nanometers. This latest chip, designed for the demands of artificial intelligence, has learned from its inception to balance functions and routines to optimize performance during a long day of activity. This Achilles heel of previous versions of the Flip has stopped bothering users, despite the inevitable consumption every time the equipment is opened and its large screen is unfolded and illuminated.

On the other hand, the manufacturer’s designers have ensured that the resistance of the components and materials are up to standard. Thus, the equipment not only resists daily impacts immutable (with several layers of Corning Gorilla Glass Victus glass surface) but could be opened and closed more than 200,000 times without showing signs of weakness. That equates to more than a hundred maneuvers a day for more than five years. Rain and small dips are not a particular problem for these smartphones either, since their IPX8 specification guarantees their resistance for 30 minutes at a depth of 1.5 meters, which still does not recommend their use in a pool or on the beach.

The cameras also enjoy a leap in quality in both models, with a concept that will be talked about and compared in the coming months: Nightography, a play on words that extols night photography in a new category. In that territory, Samsung highlights its Auto FPS video and image stabilizers, which provide clarity and resolution in very dark environments, without the usual sweeps in night photos.

Hardware and software work together in the two new Galaxy Z models to increase photo brightness by 65% ​​over the previous model. For now, the Flip4 has a 10-megapixel front camera (same as the Galaxy S22) with a focal aperture f: 2.4, which guarantees optimal photos and video calls in very low light and with the ergonomics of the Flex Mode system. Also with the mobile folded, the photographic work corresponds to a 12-megapixel dual rear camera with a generous focal aperture of F: 1.8 and an ultra-wide angle of 12 megapixels and F: 2.2. This last optic proposes to use the portrait, photo, or video mode without opening the mobile, with the consequent energy saving that this supposes in the tasks of the mobile. In a nod to content creators, the phone makes it possible to record high-quality videos with Quick Shot mode, seamlessly switch to Flex Mode, and continue shooting hands-free without having to stop the video. In addition, “users can now take selfies in portrait mode and preview them with the actual dimensions of the photos when using Quick Shot.”

The Flip4 will hit the market with three different versions of internal memory (128, 256, and 512 GB), all with 8 GB of RAM, as well as shades of purple, graphite, rose gold, and blue. The frame can be silver, gold, and black, with the option to customize the front and back shells in red, yellow, white, blue, and brown. The folding prodigy weighs 187 grams, with folded dimensions of 71.9 x 84.9 x 6.9 mm. The main screen of the Flip4 (FHD + dynamic Amoled 2X) measures 6.7 inches, while the external one is just 1.9 inches.

As the legendary Lomo already invited, Samsung also offers the possibility of comfortably photographing from all angles, to capture unrepeatable moments with its FlexCam system. Equally celebrated will be the ‘Tracking Shot’ technology, capable of focusing the attention of the video on a person, although the camera moves to any side. The Flip 4 flexible mode allows you to optimize the vision of the screens for video calls, either for one person or a group, as well as to turn half of the screen into a comfortable ‘touchpad’ to navigate between applications using one finger (for click) or two fingers (to scroll, move around the screen or launch applications).

For its part, the Z Fold 4 replicates the features of the Flip 4, with the patents of ‘Flex mode’, ‘touchpad’, and hands-free for video calls, but with the comfort of a screen 2.7 millimeters wider than the Fold 3, the latter thanks to the reduction of the screen bezels (QXGA + Dynamic Amoled 2X) of 7.6 inches (which can be expanded by another 6.19 inches), with a refresh rate of 120 Hz capable of changing depending on of operational applications. To the above is added a 6.2-inch external screen. The set measures 263 grams and is folded 67.1 x 155.1 x 15.8 mm. In the vertical format, the display of the Galaxy Z Fold4 is 3.1 millimeters smaller than its predecessor, up to 155.1 millimeters high (by the same 67.1 millimeters wide as its previous brother), which improves its comfort for handling applications and typing routines.

Productivity is the strong point of the Fold4 compared to other mobiles, not only because of the incorporation of the pointer but also because of the versatility of a screen designed specifically for mobile multitasking and collaborative work. Among other details to be thankful for, the floating toolbar, inspired by that of computers, stands out to improve the user experience of the teleworker, with direct access to the favorite and recently used apps.

The set of cameras of the Fold 4 consists of a 50-megapixel main lens, a 12-megapixel wide angle, and a 10-megapixel zoom, with 30 increases, all with the Nightography technology of the aforementioned Flip 4, including its image stabilizer and the sensor that offers 23% brightness than the Fold 3.

Samsung’s new flagship is also the first smartphone to have the Android 12L operating system pre-installed, a software created by Google “to take full advantage of experiences on large screens, including foldable screens,” according to Samsung sources.

As usual in iconic product launches, smartphones are always accompanied by watches and headphones. These accessories are much more than just accessories, to the point that you can hardly live without one another. Thus, the Galaxy Watch 5 is differentiated by its sizes (40, 44, and 45 mm), colors, and connectivity (only Bluetooth or also 4G) in addition to the price. The Watch 5, with an aluminum body, sports versions of graphite, sapphire, and silver with prices between 299 and 379 euros, while the Watch 5 Pro ( between 469 and 519 euros )  boasts its titanium anatomy, in black or Gray. They are also distinguished by their straps, the first Sport Band type, while the premium model chooses the D-Loop Sport Band double closure buckle. Both teams share the house processor, a dual-core 1.18 GHz Exynos, as well as 1.5 GB of RAM and 18 GB of internal storage.

Sleep control functions increase with blood oxygen measurement, sleep time, and snoring detection, among other tricks, now with greater customization possibilities and greater interoperability with the rest of the Samsung ecosystem (SmartThings), including turning on or off light bulbs through the clock itself. For the most athletic, the new smartwatches report on the percentage of body fat and on the recovery time after an effort, while reinforcing healthy habits with motivating advice. Regarding hardware, the battery of the new Watch 5 improves 30% compared to the previous model, with 284 milliamps (Watch 5) and 590 milliamps (Watch 5 Pro), with a fast charge via USB-C connection capable of powering 45% of the battery in just half an hour.

The new Galaxy Buds2 Pro (239 euros), in graphite, white, and Bora Purple colors,  opt for immersive 24-bit high-fidelity sound, advanced noise cancellation, and a voice recognition system, the latter to appreciate conversations with maximum clarity. They also vertically orient a small ventilation hole, with a design that protects the microphone from the discomfort of the wind. As is the norm at Samsung, the headphones also increase connectivity to understand each other naturally with the rest of the brand’s devices.

The 15% size reduction of the Buds2 Pro not only lightens the accessory to make them more comfortable but also improves the fit in the ear to prevent rotation, something much appreciated by those who do sports with the headphones always on. To all of the above is added the availability of the ‘SmartThings Find’ application, to locate the headphones in case of loss quickly and easily, both inside their case and outside.