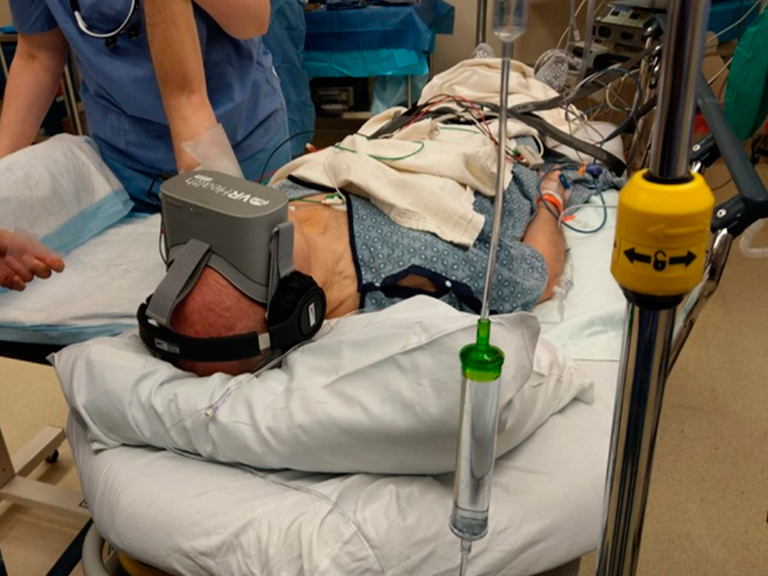 By inhibiting both motor and sensory function, regional anesthesia provides optimal surgical conditions and is effective throughout the perioperative period, with patients ideally requiring intraoperative sedation for anxiolysis. However, they usually receive disproportionate doses of intravenous anesthetics such as propofol. This may increase the risk of oversedation, leading to hypotension, upper airway obstruction, apnea, and postoperative neurocognitive disorders.

To reduce the risks of excessive sedation, physician-scientists at Beth Israel Deaconess Medical Center (BIDMC) have conducted a randomized controlled trial to determine whether virtual reality (VR) immersion can minimize the need for sedatives during hand surgery without negatively affecting patient satisfaction. They found that it significantly reduced sedative doses and the length of postoperative stay in the post-anesthetic care unit (PACU).

They enrolled 34 adults who underwent regional anesthetic hand surgery at BIDMC between December 2018 and August 2019. Supplemental anesthetics and analgesics could be administered at the patient’s request or at the anesthetist’s discretion based on their clinical judgment.

In follow-up questionnaires administered after surgery, self-reported results revealed no significant difference between the two groups in overall satisfaction. In addition, patients reported that their pain was well controlled, and they felt relaxed during the procedure. There were also no significant differences between the groups’ PACU pain scores and perioperative opioid doses. However, the VR g has discharged an average of 22 minutes earlier than their counterparts in the control group. One month after the intervention, no differences were found in terms of functional results.